St. Louis prosecutor on why she filed a complaint against city, police union Kim Gardner filed a federal lawsuit alleging the city’s police are trying to oust her for addressing racial inequalities in policing. The police union said she’s “trying to silence her critics.”

Days after Baltimore City's State Attorney Marilyn Mosby rallied around a fellow top prosecutor to speak out about the racially charged attacks they have experienced while in office, she received a 60-second voicemail flooded with "hateful rhetoric."

The anonymous voice started by chastising Mosby for traveling to St. Louis, Missouri, to support St. Louis Circuit Attorney Kim Gardner for filing a civil rights lawsuit against the city and their police union for allegedly coordinating racist conspiracies meant to force her out of office.

Mixed with half-recited, profanity-laced proverbs and racially biased opinions, the caller ended the message with a shocking suggestion. "If we'd known you all were going to be this much f-----g trouble, we would have picked our own f-----g cotton," the caller said.

Mosby received the rambling "hateful rhetoric" on Wednesday and posted it on her Twitter page on Thursday to further reiterate why she supported Gardner earlier in the week. She told ABC News on Saturday that she was "not surprised" by the message, but found it "outrageous."

"This is why #IStandWithKimGardner and this hateful rhetoric only strengthens my resolve to continue fighting for justice and working to undo the blight of mass incarceration and its impact on communities of color. #KeepersOfTheStatusQuo," Mosby wrote on Thursday as the caption with the audio.

This is why #IStandWithKimGardner and this hateful rhetoric only strengthens my resolve to continue fighting for justice and working to undo the blight of mass incarceration and its impact on communities of color.” #KeepersOfTheStatusQuo 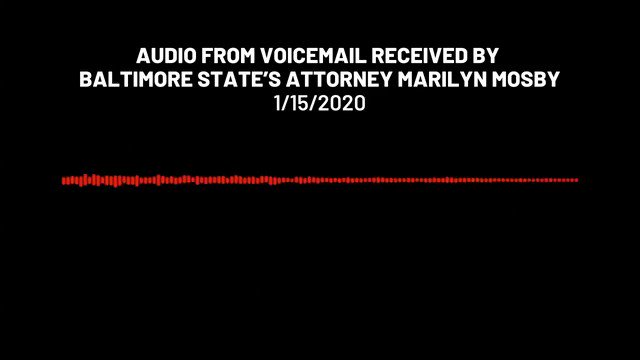 445 people are talking about this

"These are the types of attacks we encounter every day as women of color in a position of authority, and I traveled to St. Louis because this is the unfortunate experience of black female prosecutors everywhere," Mosby said in a statement to ABC News. "It’s deeply disturbing that in 2020 we still have to experience such blatant racism, but this hateful rhetoric only strengthens my resolve to continue fighting for justice, and working to undo the blight of mass incarceration and its impact on communities of color."

Gardner is the first black woman elected as the top prosecutor in St. Louis and the lawsuit appears to mark the first time an elected local prosecutor has brought a federal case against the police union for racially motivated civil rights violations.

On Monday, Gardner held a press conference to announce the civil lawsuit she filed in the Eastern District of Missouri and was supported by other leading black female prosecutors from across the country including Mosby.

Louisville police said protesters, who have been marching...

The US police shooting you have not heard about

US embassies in Africa speak up on Floyd

Breonna Taylor’s ex-boyfriend says she had nothing to do...

Trillions of US cicadas to emerge

(Aljazeera) - The United States is the only place in the word where cicadas go underground...

As Local News Dies, a Pay-for-Play Network Rises in Its...

(NYT) - The sites appear as ordinary local-news outlets, with names like Des Moines...

Without "bold action" to reduce the incarcerated population, "we will face a humanitarian...

Want to make more money? Get these IT certifications

The more certifications you have, the higher your paycheck, according to Global...

(USA Today) - Democrats will introduce a bill to expand the Supreme Court from nine...

US Contributes to Violent Attacks on Yemen While Cutting...

The Wealthy are Preparing the Country for a Second Trump...

Like putting lipstick on a pig, the wealthy, using the media propaganda machine,...

From old, dirty planes to hostile attitudes on board, people travelling from the...