Increases in minimum wages across the country may make the labor market look a bit rosier than it really is.

These days, wages in the United States are doing something extraordinary: They’re growing faster at the bottom than at the top. In fact, recent growth for workers with low wages has outpaced that for high-wage workers by the widest margin in at least 20 years.

The main story here is the long economic recovery, now entering its 11th year. For much of the early phase of this recovery, wage growth for the bottom group was weaker than for others, but it began gradually accelerating in 2014 as unemployment continued to fall. This was around the same time the labor market started tapping into people some economists had all but given up on as work force participants, such as those who had been citing health reasons or disability for not having a job.

But there has been another factor at play: the rise in state and local minimum wages.

For the last decade, the federal minimum wage has been unchanged at $7.25 an hour. But over that period, dozens of states and localities have enacted their own minimum wages or raised existing ones. As a result, the effective U.S. minimum wage is closer to $12 an hour, most likely the highest in U.S. history even after adjusting for inflation.

And with two dozen states and four dozen localities set to raise their minimums further in 2020, the effective minimum wage will keep rising this year.

These state and local actions are affecting wage data, especially for workers at the bottom. To get a sense of this impact, I have used data in the Current Population Survey to look at minimum wage workers as a group and calculate the pressure their wage gains have put on aggregate wage growth over time, controlling for compositional changes in the share of minimum wage work. 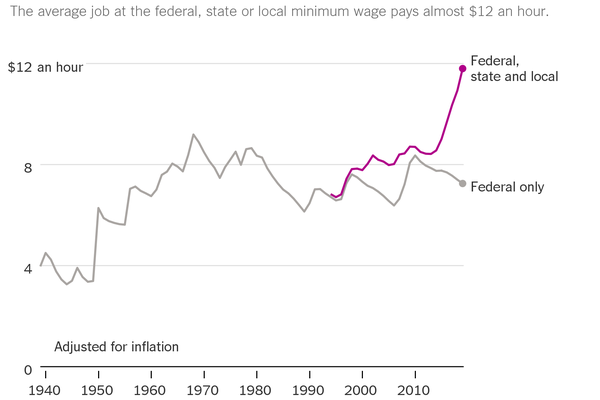 Note that this approach doesn’t settle whether minimum-wage increases are a net benefit to Americans, since among other things wage data will by definition capture only those who stayed employed after an increase. If people were laid off because of a minimum-wage increase, their loss of wages wouldn’t factor into the average.

This analysis shows that growth in average wages has been running about 3.9 percent per year in the Current Population Survey over the past two years, a bit firmer than the pace right before the Great Recession but below the near 5 percent reached in 2000.

But increases to minimum wages at the state and local level have put 0.4 percentage points of upward pressure on this recent growth. Absent that pressure, wage growth in the Current Population Survey over the last two years would have been 3.5 percent. That’s still a fine result, but it’s a bit cooler than the unadjusted data suggest.

As the analysis has shown us, wage growth at the bottom is doing well. It has been around 4.1 percent over the last two years — above the 3.6 percent at the top end, and above the overall average of 3.9 percent.

But absent the pressure from minimum wage workers, growth at the bottom would have been closer to 3.3 percent.

The US Would Lose a War with Iran; On Many Levels

Retailers board up windows, hire extra security in advance...

Prince Harry Addresses Royal Exit: 'There Was No Other...

"I want you to hear the truth from me," the Duke of Sussex said Sunday night.

Barbados says it will remove the Queen as head of state

(DailyMail) - Barbados has announced its intention to remove the Queen as its head...

And this is why this Country Will Continue to Decline

It is not just incidences like this cowardness, but all over the world, the United...

This is what China did to beat coronavirus. Experts say...

"We couldn't go outside under any circumstances. Not even if you have a pet,"...

(Common Dreams) - "I personally get really sick and tired of turning on the TV and...

Sometimes it's tough to figure out what tech gift to buy for a non-techie. Here's...

These Textbooks In Thousands Of K-12 Schools Echo Trump’s...